Before you begin a Clan Raid, you must first gather enough Raid Tickets to start one. Raid tickets are earned by completing daily achievements or by completing a new Clan Raid for the first time. All members of your clan contribute to your clan’s raid tickets, until you finally have enough to begin a raid.

Clan Raids fall into two tiers. These tiers are then subdivided into levels. As you complete Clan Raids against higher tiers and levels, the health of the Titan Lords will increase and the rewards will increase. The basics of each tier are as follows:

Clan Raids will reward your clan and yourself for completion of the raid. You will gain some amount of these resources upon completion of a raid.

Raid Tickets: If you are completing a Clan Raid tier/level for the first time and complete it in under the three day time limit, you will receive some bonus Raid Tickets to help you start the next Clan Raid sooner. (As of update 3.15, this has been removed)

Cards: Cards are equippable in Clan Raids to increase your damage dealt. See the card section for more information. You can only receive cards of the same tier or below as the tier of the Clan Raid you finished. For example, if you complete a tier 2 raid, you can get tier 1 and tier 2 cards.

Dust: Dust is used to upgrade your cards, and it can be used to purchase cards from the Dust shop. Dust is also used to improve your Arcane Bargain passive skill.

Hero Scrolls: Hero scrolls are similar to hero weapons, but they increase specific hero’s skills rather than their base damage. Note that hero scroll’s bonuses are improved for each ascension that the hero has undergone, so they will continue to become stronger as you progress in the game. Hero scrolls also contribute to leveling up your Anti-Titan Cannon passive skill.

Clan Raids are started up using Raid Tickets, and then your clan will enter a 24 hour preparation phase. At this time, you can see the Titan Lords that you will need to face and can ensure that all players are in the clan. Once the 24 hours have elapsed and the preparation phase ends, the Clan Raid officially starts. Only players who were in the clan when the preparation phase ended will be able to attack and receive rewards! You will attack the Titan Lords using your cards until they die. Once the raid has been completed, there will be an hour cooldown period to assess the damage and prepare rewards for distribution. After that hour is completed, rewards will be sent to all players who were part of the raid via the Clan notifications. At this time, another raid can be started and the cycle begins anew. 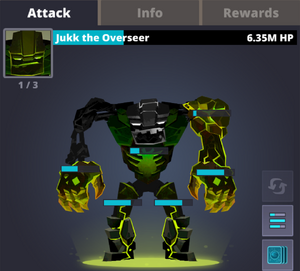 Titan Lords in Clan Raids have eight different parts: Head, Torso, Left Shoulder, Right Shoulder, Left Hand, Right Hand, Left Leg, and Right Leg. The shoulders and hands are collectively known as the arms. Each part has its own distinct health, and certain cards will have additional effects when tapping on a particular part.

In addition to the eight parts, each part also has three distinct layers.

The first layer is Armor, which only exists on tier 2 Titan Lords. Armor has its own health pool, and must be broken through to get to the next layer. Removing armor will not directly affect the Titan Lord’s overall health pool, but exposing parts by removing Armor is how damage can began to be dealt.

The final layer is Skeleton. The Skeleton only receives 5% of your base Raid damage when tapping on it, and no card effects can be activated by tapping on the Skeleton. Typically you want to avoid tapping on the skeleton and focus on the rest of the Armor and Body parts on the Titan Lord. The Skeleton exists primarily as a way to allow Arms, Legs, and the Head to all remain connected even if any parts are destroyed.

During a Clan Raid, you will need to fight between three to eight Titan Lords to complete the raid. Each will have their own sets of Armor and Body parts, and each has different distributions of health among their parts based on their name. Here are the Titan Lords you can encounter. Please note that the amounts of armor only matters for tier 2 raids.

Avoid their legs. They have enough health that you can kill them while avoiding their legs. 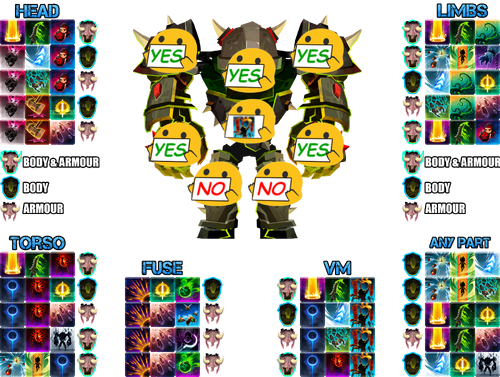 Avoid one hand. They have enough health that you can kill them while avoiding their legs. 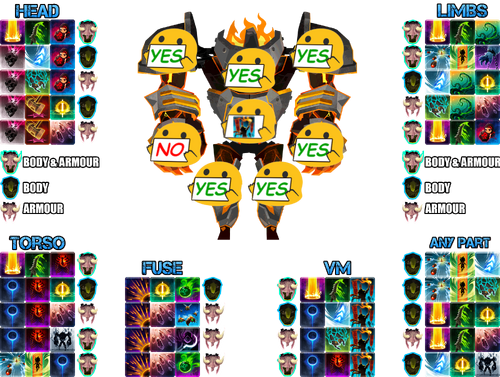 Avoid their torso if you want to kill them efficiently. 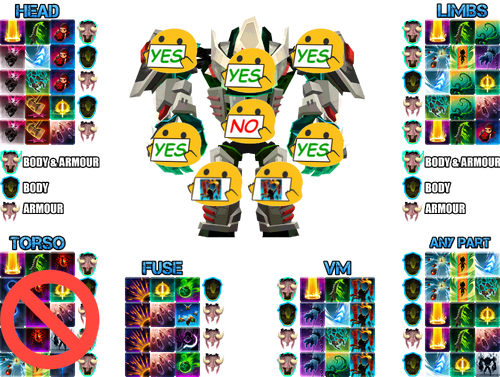 Attack the head, torso, one arm, and one leg. 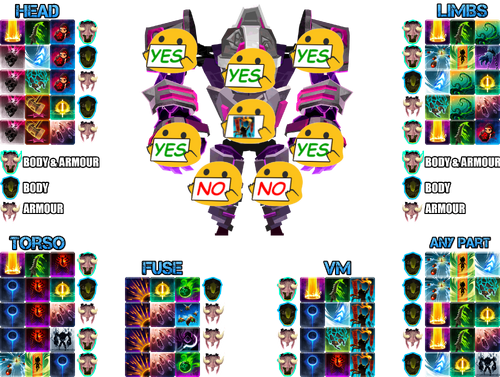 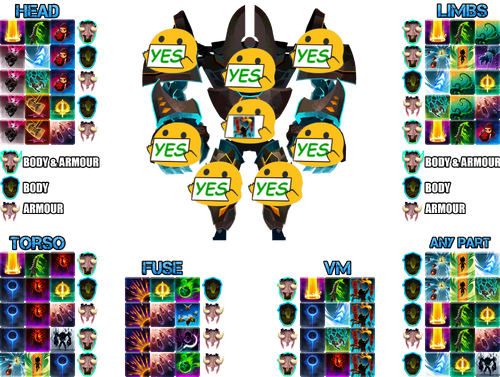 Avoid arms, shoulders, and one leg. You only need to kill one leg, the torso, and the head to kill them. 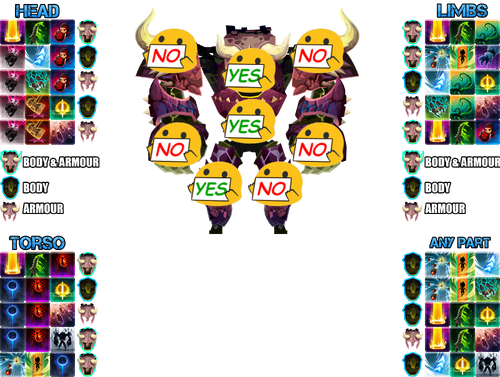 Cards are used to boost our damage when attacking a titan. Combining the effects of different cards together into a three card deck allows us to deal the most damage we can to the Titan Lords. You can use a card only once per reset though, so you will need to use several combinations of cards to do all your attacks.

In addition to owning a card, you can also level up the card to increase the bonuses that it gives you. To do so, you need enough copies of the card and dust to increase it to the next level. Typically, it is recommended to try to level up cards that you use regularly or you can use in multiple decks, since then you will get the best return on your investment. Spreading out your levels among the cards you frequently use will also require the least amount of dust and give the greatest benefits.

Just in case you don’t understand, here’s a short list to help.

When trying to build decks, you typically want card synergy so you can maximize the damage dealt in that deck. Additionally, you are limited to only a certain number of attacks and you cannot reuse a card, so setting up your decks so you get the most damage between all decks is ideal. Occasionally reducing one deck’s damage by a bit to increase another deck’s damage by a lot can be best. To note, these decks are simply to demonstrate basic deck building principles, and you are encouraged to experiment and find the decks that work best for you. Some standard deckbuilding rules apply to all decks, such as the fact that using one relevant support card will almost always be superior to a third burst/affliction card, and to try to use cards that work well together. Playtest using the Practice mode to see what gives the most damage.

Clanship Barrage/Razor Wind/Moon Beam: This deck is designed to attack the Torso part. Moon Beam deals additional damage to the Torso, and we have multiple burst cards to all help Clanship Barrage scale up and deal more damage.

Rancid Gas/Blazing Inferno/Thriving Plague: This deck is designed to attack all titan parts using Afflictions to deal massive damage. Blazing Inferno and Thriving Plague both want to have stacks active on all parts, and Rancid Gas helps increase the proc chance and damage of these Afflictions. Having damage ticking on every part can really add up!

Purifying Blast/Acid Drench/Decaying Strike: This deck is designed to attack a couple key parts. Acid Drench and Decaying Strike will apply their stacks fairly quickly, and then Purifying Blast can remove those stacks to deal lots of bonus damage. If you tried to attack too many parts with this deck, Acid Drench wouldn’t be able to refresh the stack durations, and so damage would be lost.

While there may not be many ways to specifically organize raids right now, there are still ways to try and maximize the effectiveness of your clan.

1. Create groups that level only specific cards. This typically will be done to split up people leveling Head/Torso cards and Armor/Body cards, but having your team specialize can give good results. This can involve some coordination on when people can hit, especially if you require an Armor team to hit before a Body team can begin.

2. Spread out damage. If several people all attack the same part at the same time and destroy it at once, any overkill damage to that part is wasted. Using decks focused around targeting several parts can help spread out your damage and prevent waste. This can also prevent situations where a Head or Torso is destroyed and your clan has a lot of players who have leveled up those cards, but the rest of the titan is still alive and well.

3. Focus specific parts. This strategy revolves around maximizing Victory March. Targeting specific parts and bursting through them as soon as possible helps expose the skeleton, which can then give a large bonus to damage when using Victory March. This strategy can work very well for titans that don’t have much health in their arms, since the four parts can break easily and allow everyone else to finish off the head, torso, and legs.

4. Set timers for the final attack reset. 3.0 was supposed to remove timers, but the final attack reset still has the time crunch that will define the difference between top clans and regular ones. Completing the raid two minutes after a reset is better than six hours after, especially since everyone could use their attacks and save you time.

5. Abuse resets. Currently the game doesn’t register your attack until your damage is submitted to the server. If you are using a deck that has a high amount of variance in it, you can repeat your attack over and over, closing the game before your damage submits if your luck is bad, until you get a perfect attack with good RNG. This can help maximize your damage, even if it can take more time to do your attacks.

Retrieved from "https://tap-titans-2.fandom.com/wiki/Clan_Raids?oldid=23787"
Community content is available under CC-BY-SA unless otherwise noted.